Of Panthers and Cowbirds – A Lesson to be Learned

Many years ago I learned a good lesson about wildlife and nature photography. Always have your camera ready and keep a predetermined setting so you won’t miss that sudden opportunity that will so often leap out in front of you. I missed my one and only Florida panther shot because I was in the Everglades with both cameras safely put away in my camera bag when this huge tawny cat strolled out into the open and had I been ready, I’d have a Florida panther photo of my own.

Recently on a trip along the Gulf Coast, I was looking for any late migratory birds that might be coming in from over the Gulf of Mexico, and otherwise enjoying some late spring/early summer weather when I ended up in the area near Eagle Harbor on St. Joseph’s Bay in rural Gulf County. It was a beautiful late afternoon and the angle of the sun was making the water as blue as could be, the foliage along the water’s edge positively glowed with vibrancy, and the bright sun and the angle of the light created the most amazing contrast. In other words – nature’s most perfect photography conditions.

As I was stopping at several locations along this remote stretch of the “Forgotten Coast“, I wisely had my camera with telephoto lens in the passenger seat, ISO set to 400, white balance set to cloudy (my personal choice of predetermined WB) and the speed to 1/500th of a second. Because I keep this setting all the time when driving (passenger and driver’s side windows down, of course), I can rapidly adjust to any given situation nearly instantly with a few flicks of my fingers on the dials and controls, while keeping my eye on the subject when it or they suddenly appear out of nowhere. This is what happened when a small flock of brown-headed cowbirds flew over the hood of my car and landed in the grass on the side of the road. I was ready! 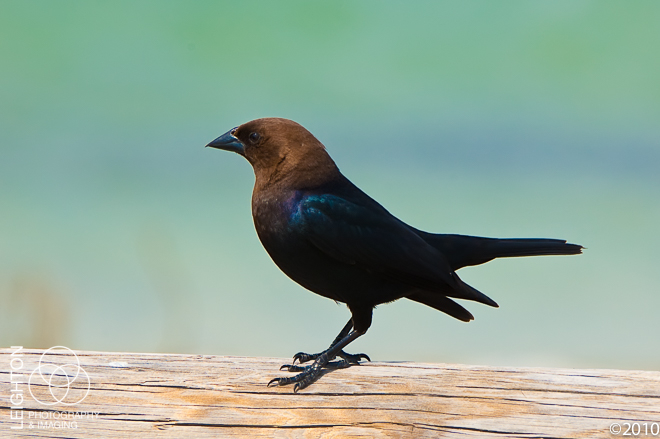 I’ve never really had a good look at brown-headed cowbirds before, and only from a distance when they visited our backyard bird feeder when we lived in Fort Myers (SW Florida). When they passed overhead, I immediately got as close as I could with the car and shut the engine off. At first I saw many females, small drab grey mottled birds that at first I thought might be some sort of sparrows. Then a male landed on a wooden fencepost and I instantly knew what it was. The beautiful lighting that I mentioned previously caught the light perfectly, and iridescent blues and purples were reflected off of its jet black wings. What a beauty! I was ready for it because I had learned my lesson with the panther, and this time I didn’t even have to get out of the car!